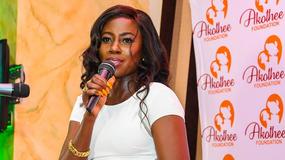 Singer and businesswoman Esther Akoth aka Akothee has blasted Radio Jambo for referring to her with the word Maskini.

The station ran a story on their blog on how the singer was mistreated while in the United States, a move that made her arrive late for a show.

They then said that poor Akothee (Maskini Akothee) was forced to apologize to her fans for getting late.

The mother five however, did not take lightly the words used by the radio station saying that there are names she doesn’t like being referred to by.

She went on to say that she hates to be sympathized with, and instead prefers to be encouraged. Akothee called out the station insisting that encouragement and congratulations are better than sympathy.

This comes a few days after the self-proclaimed President of Single Mothers revealed details of the mistreatment she was subjected to, while in the US for a performance.

According to the Rollam maker, she had been invited to stage a performance in Minneapolis with the aim of raising money to promote and support her foundation (Akothee Foundation)

She also disclosed that her manager was left stranded in the middle of night, after being dropped off by the road side with no transport back to his hotel room.