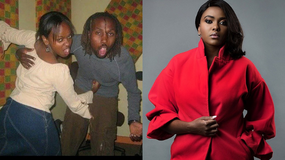 On Thursday, Citizen TV presenter Willis Raburu shared a never seen before Throwback photo of Journalist Anne Kiguta alongside DJ Moz, insinuating that the idea of her Punchline show on K24 was born longtime ago.

“This is where punchline began @annekiguta @mozdj #TBT” reads Willis Raburu’s caption as in the picture, it looks like Kiguta was punching DJ Moz.

The photo in question triggered the Punchline host down the memory lane, remembering her old days when she was trying to make a name for herself in the media industry.

In her length post, The K24 anchor disclosed that her journey started a Hope FM, where she used to walk for a very long distances before reaching her work place.

“Thank you @willisraburu for reminding how far I’ve come!! I was 18. First job at Hope Fm. Really earning peanuts. No what’s less than peanuts? Half a peanut? That’s what I was earning. I’d leave the Daystar Athi River campus, drop off at Airport view estate and literally walk all the way to NPC valley road… actually it was more like run! Why walk, because I had choose between the luxury of getting on a bus or a cab or saving that fare. The bus would get to Nairobi at 5:30pm & I’d be in studio at 6:30pm. Always exhausted but just so thankful to be on air and having the time of my life with this guy! I could cater for my little expenses with my few shillings from this gig. Like most of us I wasn’t born with much more than a loving and decent family. And like my family I had to learn how to work for any little thing I had. And I always have. Sure we were not “poor” in the sense that my parents could afford to take me school and I went to some pretty good schools but bottom line- you had to work” reads part of Anne Kiguta’s post.

Being able to interview notable figures

She added that her career has been incredible, being able to interview the President and other notable figures, a think she had not pictured before.

“Looking back I’m so thankful for that. Cause if you learn how to build it, no one will ever be able to take it away from you (try as they might). So here I am with @Mozdj and especially today looking back at how far I’ve come. My career has been incredible! There isn’t anyone that I haven’t been able to interview from the President and counting, and more than once. I was going to post a “beautiful“picture but no, thank you Willis. This is the beautiful one. The one that reminds me how I had no idea that one day God would take me from nowhere and put me on a national stage. And not just put me there, give me authority in my calling. That I could speak and it would matter! This is the picture that reminds me He is still the same God and is still going to take me places and leave me speechless at what He will do. Can’t wait to frame it! Hopefully this will be the picture that will also remind you with God all things are possible. ❤️ (please tag ever gossip blog in town. Come see how good God has been to me” wrote Anne Kiguta.