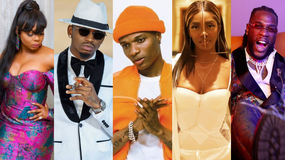 Here is the Full list of your biggest stars

Here is the Full list of your biggest stars

CNN being one of the biggest mainstream media houses, has been shaping opinions across the world with a team of experienced experts in almost every field.

Top on the list is Nigeria’s Damini Ebunoluwa Ogulu aka Burna Boy. The African Giant earned the recognition basing on the milestones he has achieved in his music career. Just the other day Burna got nominated in for the Best World Music Grammy.

Number two on the list is Angelique Kidjo, a singer, songwriter and activist from Benin. She is one of Africa’s most respected performers and has won three Grammy Awards in her wide-ranging career.

Chibu Dangote is a star who can fully attribute his success to music and make it count.

Nigerian songstress Yemi Eberechi Alade, simply known as Yemi Alade has been placed fourth on the list. Yemi gained prominence after winning a Talent Show in 2009, and is best known for her hit single ‘Johnny,’ which has become an international anthem.

Tiwa Savage, who won the Best African Act at the 2018 MTV Europe Music Awards, becoming the first woman to win the category is 5th on the list.

Number 6 on the CNN compilation appears, Award-winning Nigerian entertainer, Wizkid who has collaborated with multiple international artists including Drake, Wale, Skepta and Beyonce.

Award-winning Nigerian singer, Mr.Eazi is the pioneer of Banku music, a fusion sound that is a mixture of Ghanaian highlife and Nigerian chord progressions and patterns.

Sho Madjozi won the 2019 BET New International Act. In her acceptance speech, she said, ‘My story is a testament that you can come from any village, in any forgotten part of the world, and still be a superstar.

Mwila Musonda, aka Slapdee, is a Zambian hip rapper who uses his record label to raise donations for local orphanages and children’s hospitals.

Does the CNN list meet your expectations of Africa’s biggest music stars?