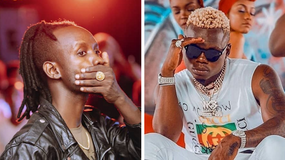 Diamond’s producer Lizer Classic has disclosed why he cannot work with Harmonize, after he left the WCB Wasafi label.

Speaking to a Tanzanian radio station, Lizer clearly stated that he cannot work with the Uno singer, because he is no longer part of the WCB family.

He went on to say that he is an employee of WCB and once one leaves the record label, they lose the privilege of having his services.

Lizer who worked on Harmonize’s hit song Kwangwaru added that working with Harmonize would give him a bad image, and people will think that he is also leaving WCB.

The producer noted that he is still friends with Harmonize and they speak every once in a while.

His words come a few months after Harmonize officially quit WCB to start his own label Konde Music Worldwide.

On his exit, Konde Boy was asked to pay Sh22.4 million (Tsh500 Million) to gain exclusive rights to all the music he worked on under WCB Wasafi.

Harmonize disclosed that his contract stipulated that in order to end his relationship with WCB Wasafi, he had to pay Sh22.4 million and he had settled a bigger portion of the amount.

He also mentioned that he had to sell three of his houses to raise money required to buy exclusive rights out of WCB Wasafi.