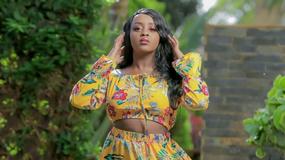 Songbird Nadia Mukami has opened on her latest song Maombi, explaining why she decided to have it Gospel.

Speaking to Pulse Live, Ms Mukami made it clear that she had not switched to the Gospel world, and it is only a thanksgiving song to God.

She pointed out that just like every other person, Secular artistes have a relationship with God and being in the secular world, is for business and passion.

“It’s totally a no. I knew that people would take it like that because I have been asked that question a million times but no. As secular artistes, sometimes we even pray a lot. We do secular music because its business, its passion music is very universal, you’re singing about love even in the bible there’s love so I feel like people confuse it. So for me it’s just a thanksgiving song to God for what he’s done in my life and to inspire someone else to give thanks,” she said.

Nadia Mukami went on to note that the song is very personal and she wrote it while at the lowest moment of her life. According to her, she had a name in the industry, but was also broke.

Going by the comments on the song uploaded on YouTube about 22 hours ago, fans are impressed as some went as far as asking her to switch to Gospel music.