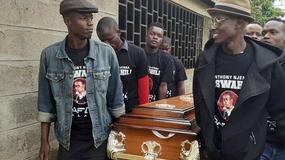 On Thursday, the late Churchill show comedian Njenga Mswahili was laid to rest at Lang’ata cemetery, in Nairobi by close friends, family and colleagues in the comedy industry.

Njenga’s burial comes almost a week after he was found dead on Dagoretti rail tracks under unclear circumstances.

Information in the public domain indicates that the body of the late Njenga left City Mortuary for Lang’ata Cemetery on Thursday.

An update of Mwende Comedian’s page reads ; “On our way to give our friend and workmate and an amazing comedian a peaceful sendoff a ..@jengamswahili.. Rip my friend. Fare the well jenga mswahili”

The late Anthony Njenga occasionally made appearances on the Thursday night comedy show (Churchill Raw) since its beginning in 2013.

“James Anthony Njenga was found dead on Dagoretti rail tracks. It is not yet clear under which circumstances this fate befell him, but police have been involved and more will be divulged,” read part of the statement.

Many who spoke about Njenga’s demise, admitted that fellow comedians, media and corporates gave him a deaf ear when he was in need.