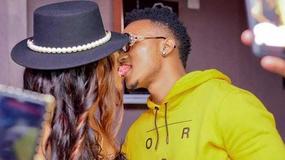 Is this the new celebrity couple in town?

Is this the new celebrity couple in town?

Singer Brown Mauzo has raised eyebrows after being spotted getting cozy and flirting with socialite Amber Ray.

For a while now, rumour had it that the two were in a romantic relationship, but none of them had confirmed. Over the weekend however, they took things to a whole new level during Amber’s birthday celebrations.

Going by photos and videos taken during the celebration, the two are seen kissing in the name of eating the birthday cake.

Later on, they started gushing out to each other with lovely words and confessions of how they love each other.

Mauzo took to Instagram to share photos that showed him kissing Amber Ray, affirming that his heart had settled on her.

“Every moment creates a memory, the heart loves😘 and my soul has finally chosen you. @iam_amberay . Love you like a fat kid loves Cake @iam_amberay #MrLoverMan #mauzoclassic,” wrote Brown.

In response to Mauzo’s love letter, the Zumaridi Cosmetics CEO said, “Thank you for loving me 🥰I love you more honey”

In a separate post, the Kwe Kwe maker (Mauzo) who was in the gym decided to send a signal to Amber “Mama Nakufa gym @iam_amberay”

Are the two an item? Be the judge.

Break up with Zaheer

“I would like to inform you that I am no longer married to Zaheer Merhali Jhanda and no one should link me to him or his family in whatever way. It has been great couple of years despite the challenges that I have come across, I apologize to my son and my family for all the insults they have had to bear in the past because of my decisions. Let there be peace because I have my own life to live, dreams to chase and goals to fulfill. This also goes to say that I am no longer a Muslim” wrote Amber Ray.

She later hooked up with singer Syd, but their affair did not last long.