Janet Mbugua’s reaction after John Cena followed her on Twitter 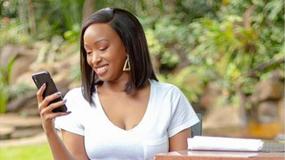 TV host Janet Mbugua had a priceless reaction after she was followed by WWE star John Cena on Twitter.

An excited Ms. Mbugua who could not hide her excitement went on to share a screenshot of the same as she accompanied the post with the words of singer Sho Madjozi.

A quick scan by Pulse Live also revealed that it is true, the wrestler is one of Janet Mbugua’s 46.4K followers on Twitter.

Janet’s follow follow from the WWE Star comes a few days after Cena surprised Sho Madjozi while performing on a live TV show.

Cena surprised Madjozi in California as she performed her hit single “John Cena” on ‘The Kelly Clarkson Show’.

Her reaction on realizing that the popular wrestler whom she dedicated the viral hit to, was dancing to the song behind her, was priceless.

Sho Madjozi explained that the theme of the song was centralized around a phrase John Cena used to say while still at WWE “You can’t see me.”

According to Sho, she wrote the song after a boy she liked failed to direct any attention her way.