Juma Jux addresses allegations of having an affair with singer Ruby 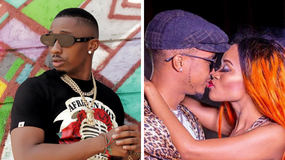 Ruby broke up with her baby daddy Kusah

Ruby broke up with her baby daddy Kusah

Tanzanian singer Juma Jux has been forced to come clean on allegations of having an affair with songbird Ruby.

This comes a few days after she announced that she had parted ways with her baby daddy Kusah, in an explosive post.

Speaking to Lil Ommy, Jux said it was unfortunate that the picture out there paints him as the reason for Ruby’s breakup with Kusah, as he insisted that there is no relationship between him and Ruby.

He also mentioned that he knew Ruby before she became a star, and at the time she worked at a studio owned by one of Tanzania’s producers called Bob.

When Ruby became a star, Jux stated that he was lucky to have featured her in his Love album, which they recorded in the company of her boyfriend Kusah.

They again met at a show in Arusha where they shot the video for their song and since then, they had never met, until he started seeing paired pictures of them going viral.

A few days ago, the Alele singer shocked many after going public with information that her baby daddy had been very violent in their relationship.

S.Sudan NEWS PORTAL:  Why Nasa coalition has met its waterloo in Kibra contest

In a post seen by Pulse Live, Ruby stated that Kusah used to beat her with allegations that she was cheating with WCB CEO Diamond Platnumz and RnB singer Juma Jux.

Ruby further divulged that she was determined to help her baby daddy make a name in the entertainment industry by introducing him to people like Diamond, but he instead decided to listen to rumours that were being peddled around by gossip pages.