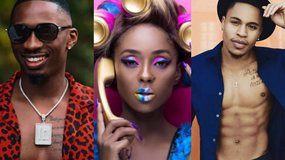 All I want is peace.

All I want is peace.

Bongo Singer, Juma Jux has for the first time opened up about her ex-girlfriend’s (Vanessa Mdee) relationship with power star Rotimi.

In an Interview with a local radio station, the bongo singer revealed that he was very happy that she had moved on and wished her the best in her relationship.

He also addressed claims on how he had quickly moved on with new Asian Bae, Nayika. Jux disclosed that they broke up with the ‘Cash Madame’ singer in December 2018, but kept it between themselves. Moving on 9 months after a breakup wasn’t a short time for him.

Jux admitted that he watches Power and loves the way Rotimi acts.

The ‘In case you don’t know’ singer went ahead to say that he wouldn’t blame the Vanessa since there are issues that arose in the relationship that led to their break up.

Two weeks ago, Vanessa confirmed that she is dating Power actor Rotimi popularly known as Andre Coleman in the series.

In a phone Interview with Clouds FM, Ms Mdee admitted being in a romantic relationship with Rotimi, but they are keeping it private.

“Nipo Miami ndio na Mpenzi wangu, sio siri kwamba tuna mahusiano, it’s not a secret. But we would like to keep our relationship private. We love and respect each other so much and wanna keep building,” said Vanessa Mdee.