Naiboi signs Band Beca as he seeks to expand his empire 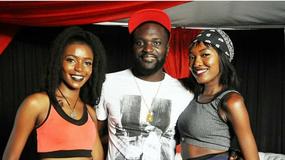 Band Beca got a new home

Band Beca got a new home

Michael Kennedy Claver professionally known as Naiboi has officially signed Band Beca to his stable dubbed “Naiboi Worldwide” as he seeks to expand his empire.

The Pacho CEO, made the announcement via his Instagram requesting Kenyans to support his new signees.

The making of Band Beca

Before being signed by Naiboi, Band Beca had songs like;  Rie or Die, Tonight ft Petra, Maua, Toka, Sa Hii and Brathe.

In 2017, Band Beca made debut on Coke Studio Africa, a platform that seeks to promote and expose African music to the world. They teamed with South Africa’s AKA and Nigeria’s Olamide for a re-fix of their song called Toka. Band Beca is made up of Becky and Carol.

On the other hand, the 2 in 1 hit maker (Naiboi) has been on a mission to extend his roots to the International market after a successful music career in 2018. Currently he is on a tour in the US, to promote his music.

In February, The Usipime Mwanaume maker was among musicians who represented Kenya at the 2019 Coke Studio Africa.

In 2014, he made the switch from being solely a music producer, under the moniker Rapdamu, to a recording artiste, and with the switch came a change of name to Naiboi.