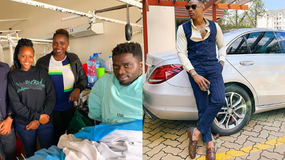 Just in Love Music CEO Otile Brown has issued a statement addressing an accident he was involved in, on 20th November 2019, at Yaya Centre.

In a post seen by Pulseive.co.ke, the RnB singer mentioned that the accident involved his Mercedes Benz and a boda boda guy who was carrying 2 passengers.

The three were rushed to a nearby hospital by Otile and his team. The passengers had sustained minor injuries, while the rider had to be admitted for further checkup.

Taking the Injured to Hospital

“To my dear fans, family, friends and supporters, my team and I would like to officially acknowledge the accident I had on Wednesday the 20th of November 2019 around Yaya Centre involving my car with a boda boda carrying 2 passengers. My team and I took the injured persons to the hospital and made sure they received the needed necessary treatment and we catered for the resulting bills.2 people had sustained minor injuries and were released on the same night after treatment while the rider of the boda boda Mr. Yassin Maina Richard had to be admitted to the hospital for further checkup,” reads part of Otile’s statement.

Following the unfortunate incident, the Baby Love hit-maker had to buy a new motorbike for the rider he identified as Yassin Maina Richard.

Bought a new Motorbike for Yassin

“I have kept constant communication with Mr. Yassin’s family and to enable him resume earning a living for his family I have procured a new motorbike for him. While accidents are unavoidable, we must remain human. I would like to thank all those who called to check on me and continue praying for Mr. Yassin’s recovery. God bless you all. OTILE BROWN!” shared Otile Brown.

Despite the singer escaping unhurt, his Mercedes Benz was badly damaged, with the front bumper guard falling off, and the bonnet dented.