Photos of Weezdom in bed with Nicah the Queen surface online, Bahati intervenes 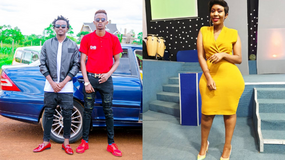 The photos have raised eyebrows among their fans

The photos have raised eyebrows among their fans

EMB signee Weezdom is yet again at the center of another scandal after his alleged photos in bed with gospel singer Nicah the Queen surfaced online.

In the photos being circulated online, Weezdom is seen shirtless in bed with a woman, seemingly Nicah the Queen. In another photo, Weezdom is seen holding Nicah’s boobs from behind as they strike a pose for the camera.

Following the wide spread of the photos, EMB President Kevin Bahati opted to get a clarification from Weezdom, if indeed he is the one in the pictures.

Do you have a twin Brother?

It not yet clear when the pictures in question were taken and whether the two ever had an affair.

One user who also commented on Weezdom’s photo said “opiccaopicca @bahatikenya but truth be said. That nigga was Weezdom… and it’s so embarrassing indeed. That he can deny it.”

However, the Ushuhuda Maker (Nicah) has denied the photos, saying she has never been in bed with Weezdom.

The controversy surrounding the two gospel stars comes weeks after Nicah introduced her new Nigerian boyfriend to the world.

Be the judge, who do you think is in this pictures?