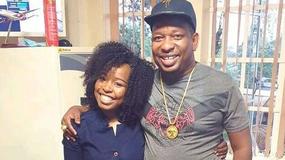 Sonko was arrested in Voi

Sonko was arrested in Voi

Nairobi Governor Mike Sonko’s daughter Saumu Mbuvi has reacted after her dad was arrested on Friday.

The first daughter of Nairobi took to her Instagram page where she shared a picture, while taking a selfie with her dad.

She had earlier posted emojis showing that she was praying for her dad, in one of her insta-stories.

Her reaction came after the Ethics and Anti-Corruption Commission (EACC) confirmed that they had arrested Nairobi Governor Mike Sonko as he attempted to flee from the authorities.

In a tweet on their official handle read: “EACC Kenya confirms that Nairobi City County Governor Mike Sonko Mbuvi has been arrested while escaping arrest at a roadblock in Voi and is being transferred to Nairobi to face charges of corruption and economic crime.”

The DPP has preferred eight charges against Governor Sonko which were outlined as Conspiracy to commit an offence of corruption, willful failure to comply with laws relating to procurement, conflict of interest, abuse of office, unlawful acquisition of public property, deceiving principal, money laundering and acquisition of proceeds of crime. Sonko was to be arrested and charged alongside ten other individuals.

S.Sudan NEWS PORTAL:  R-TGoNU to agree on number of states and boundaries within 90 days of its formation

In a statement, however, Sonko termed DPP Noordin Haji’s order to have him arrested as choreographed lies, insisting he will not be cowed by them.

“I have read word by word the statement from the DPP that details reasons for my arrest and nothing gives me more confidence than leafing through it, knowing very well we have the facts to dismantle this choreographed lies,” he said.