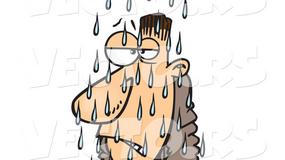 There are men who have conformed to rigid traditional gender roles to make them appear rough, masculine and powerful.

This sense of identity has made them avoid indulging in certain activities so as not to appear weak to other men or even women.

This manly trait made boychild adopt a ‘man card’ popularly referred as ‘gangster points’ which keeps them grounded.

Here are some of the most peculiar and interesting toxic masculinity traits that Kenyan men are obsessed with;

Majority of our men can never eat bananas in public. They’d rather split into two or not even eat a banana at all because it makes them look gay.

Eating an ice cream cone or a sausage is also considered stupid and homophobic.

Can’t carry an umbrella when its raining

A man would rather soak or drench in the rain than carry an umbrella, a simple tool that cannot do any harm to anyone. Reason being? Real men don’t use umbrellas.

A man would rather get lost and rotate around one spot for three hours than ask for directions. A man asking for directions makes him feel less of a man and accepting defeat.

Some men will go to an extent of not using lotion or any moisturizer just because mwanaume ni kuparara. Lotion will be used in body parts that can only be seen.

Who bewitched our Kenyan men?

Someone lips would rather resemble the cracked Kalahari sand than carry Vaseline or lip balm. Men don’t do that here.

There are some men who’d rather die in their bed than go to hospital because they’re sick. All because mwanaume ni kujikaza.

They can’t carry a lady’s handbag

A Kenyan man would prefer to get hit by a lorry and die on the spot than carry a lady’s handbag.

When majority of men go to the shop, they’d rather carry their stuff with a hand than carry a carrier bag to put their stuff. You will even hear them say ‘mwanaume ni kupepeta vitu’ .

They can’t seat close to each other

Men can’t stand seating close to each other. Anyone who attempts this can even be struck by lightening.

Some men will never shave their armpits or even their pubic hair, in the name of mwanaume ni msitu.

They can’t hug each other

A man cannot hug, hold hands or even put his arm around another man without people raising eyebrows. He is not allowed to show any affection or show any emotions whatsoever to another man because that will be termed as a homosexual.

They bump, give each other a head nod or hi-five, but hugging, that’s a crime.

Have you ever heard a guy tell the other “Bro na hiyo trao imekutoa poa?” Probably not. That’s because men rarely complement each other. It’s wrong, its unacceptable, it’s a taboo

They will never tell the other that they are handsome, or notice their weight loss

Men don’t love wearing bright colors such as pink, yellow, red or even purple. The society has programmed men to think that anything feminine is weak, bad or defective.

Most men can never seat close to a nduthi guy or seat between the driver and a lady. That is considered unmanly.

Can’t tell each other goodnight

A dude will never call another dude just to wish them goodnight, their conversation will last like one minute and it will probably end with “Tutapatana siku ingine”

Some men don’t even carry handkerchief eti because a real man is not supposed to. Surely, isn’t this unhygienic.

There are men who would literally starve to death than carry food or get spotted with a lunchbox. This is because it makes a man look unmanly.

Massage and manicures are a no no!

You will hardly spot a man in a spa or a salon getting a manicure or a pedicure because they are too womanly.