Weezdom in bed with Nicah the Queen, Akothee speaks on missing marriage life and other stories on #UhondoMtaani 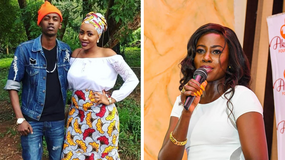 It is another wonderful week and as we edge closer to the festivities, #UhondoMtaani is still here getting you entertained with the latest and juiciest of entertainment stories that made headlines this week!

So, let’s dive directly into the business of the day;

In posts shared on her insta-stories, Latts admitted that they do not have a perfect marriage and they have their ups and downs.

She went on to say that they make mistakes and learn from them just like everybody else, as she refuted claims that that they were parting ways.

“Thanks for the hundreds of DM messages but one question… who told y’all I’m leaving my HUSBAND!? We aint no pretenders, we are humans… we have our vulnerable moments and situations, we don’t paint it like we’re perfect, never have… we don’t ask to be nobody’s couple goals cuz, we both made and making mistakes and learning and getting better at this thing called LIFE. So y’all perfect men and women kudos to you,” read one of the posts.

Her words come a few days after Konshens in a long post on Instagram insinuated that they had parted ways. He also apologized to her for putting up with every bad thing he threw her way, noting that he was going to have himself fixed, and did not want anyone.

Weezdom and Nicah The Queen’s bed! What don’t we know?

EMB signee Weezdom was at the center of another scandal this week, after photos while in bed with gospel singer Nicah the Queen surfaced online.

In the photos, Weezdom is seen shirtless in bed with a woman, seemingly Nicah the Queen. In another photo, Weezdom is seen holding Nicah’s boobs from behind as they strike a pose for the camera.

Following the widespread of the photos, EMB President Kevin Bahati opted to get a clarification from Weezdom, if indeed he was the one in the pictures.

It’s not yet clear when the pictures in question were taken and whether the two ever had an affair.

Kenyan singer Esther Akoth aka Akothee said that she misses life as a married woman and being taken care of by a man.

This was after a man (Kwena Kwesh) sent her a message saying that his wife had threatened to leave him several times and be independent like Madam Boss.

Akothee stated that she does not know how she got to where she is, but it was not easy for her. She noted that she escaped death thrice in the process.

The mother of five said she hoped the distressed man’s wife knows what she is doing because that road has stigma and rejection, adding that what worked for her (Akothee), may not work for the wife.

Kenyan rapper Noti Flow recently made a u-turn on her earlier statement, confirming that ex-boyfriend Colonel Mustapha is indeed gay.

Noti stated that rapper Trap King Chrome was right when he went public with claims that Mustapha was gay.

“You guys @trapkingcrome was right. Mustafa is gay and he lives with his boyfriend in Utawala! Confirmed.wow Fake ass Muslim,” alleged Noti Flow.

The former Nairobi Diaries actress had a few days before issued a statement defending Mustapha, saying the rumours of him being gay were extremely ridiculous and hideous.

She expressed disgust at how people were talking ill of Anko Mus.

“Before you tarnish someone’s name & try to ruin their reputation, think of ‘ wat if ‘ the same was being done to you . It’s disgusting how people can stoop so low just for clout The bullshit y’all are spreading about him are extremely ridiculous & hideous. Despicable Shame on y’all lowlives . Karma will catch up soonest,” read her post.

This was after she shared photos and videos of her gender reveal party that doubled up as her baby shower.

“Be specific in your prayers God listens 🙏🏿😊🌸….,” she captioned one of her pictures.

The lavish gender reveal party was themed pink, and was attended only by friends close to Ms Kamau’s heart.

Lizzo had shared a number of nude photos on Instagram and Ms Monroe saw it good to react calling her fat. She added that she was a whole elephant.

Huddah’s mean comment on plus-size women angered a number of celebrities, among them Neomi Ng’ang’a, who said no human being was perfect and people can express their opinion without insulting others.

The style by Neomi CEO, went on to remind Ms Monroe that the people (plus size women) she was busy insulting were among those who buy her products and therefore she should tread carefully with her words.

“DID I HEAR SOMEONE CALL HER ELEPHANT??? ##God knows why we human beings do not have it all. I reckon it’s so we can compliment, complete and appreciate each other. None of us is close to perfect. However it is very sad when God gives you a sane mind and opportunities to use your brain wisely for the benefit of yourself and others and you choose to be ourightly silly and thoughtless. Don’t you have a more acceptable and civil way of expressing or sharing your opinions without insulting? You claim to empower youth, are you now going to filter by size? Is this your best shot at serving a solution to a problem you seem to have ‘elephantised’? #EVERYWOMANISAWOMANPERIOD!! SKINNY OR PHAT! All women in their own capacity are Magical ..they are strong ..they have beautiful stories!”

Neomi’s sentiments we echoed by other public figures among them Catherine Kamau, Teacher Wajiku, Amina Abdi Rabar, among others.